For the DataLad project we will establish a large number of git-annex repositories. Majority of those git-annex repositories will not contain any data, but rather a lot of empty files and/or broken symlinks. Some data sharing projects which we are going to cover contain thousands and even millions of files (e.g. HCP500 release S3 bucket contained over 5 million files). Originally, we had a very nice experience with ZoL (ZFS on Linux) on computational clusters we administer/use. Its volume management, data integrity checking, and various features (snapshotting, etc) are very appealing and served us well before. So ZFS was a logical choice to deploy for our DataLad development/storage server(s). But unfortunately, during development we ran into complete system stalls (which thanks to ZoL developers were promptly resolved), and overall very slow performance (even with SSD L2ARC caches and relatively large RAM on those boxes). So it became important to investigate if we were indeed hitting the limits of contemporary conventional file-system designs while dealing with large number of files, or just getting bound by ZoL.

All the benchmarks were ran on a recently purchased server

Below we present results of the analysis of collected timings, which in its entirety is available as IPython notebook with all the necessary data in the repository if you would like to have an alternative analysis or visualization done since presentation here is quite messy.

Overall verdict is: we are going for Software Raid (RAID6) + LVM (scalability) + Btrfs (performance) as our setup with robust volume management (snapper tool providing snapshots management) and good performance (with tolerable impact from enabled compression). Btrfs exhibited robust performance across a wide range of meta-information utilization, while ReiserFS — the next contender — failed to scale (although it may have behaved better with some tune up/options — we didn't explore). ZoL/ZFS quickly became way too slow to be even properly tested and thus was not considered for our case. Additional features of Btrfs, such as COW (copy-on-write) can already be utilized by git-annex so providing Btrfs additional bonus points in our decision. The choice of compression (lzo vs zlib) for Btrfs did not have a clear winner, and impact from compression was not completely detrimental (although went up to ~30% on git clone operation overall impact due to compression).

Disclaimer YMMV. We have tested file-systems on quite an obscure setup, which is very heavy on meta-information without much of actual data being stored — lots of tiny files with as many symlinks and directories (under .git/annex/objects). Though, majority of the benchmarked commands (e.g., chmod, du) were meta-information access heavy, so even if large data files were stored we would expect similar performance in those cases.

Following results present timings on the first 10 rounds across file systems on "cold" runs of the commands. Ratings/timing table presents overall rating (0 — is the best, estimated as a median among ratings across all benchmark commands) with mean timing (across rounds) per each command.

Gross time per each file-system 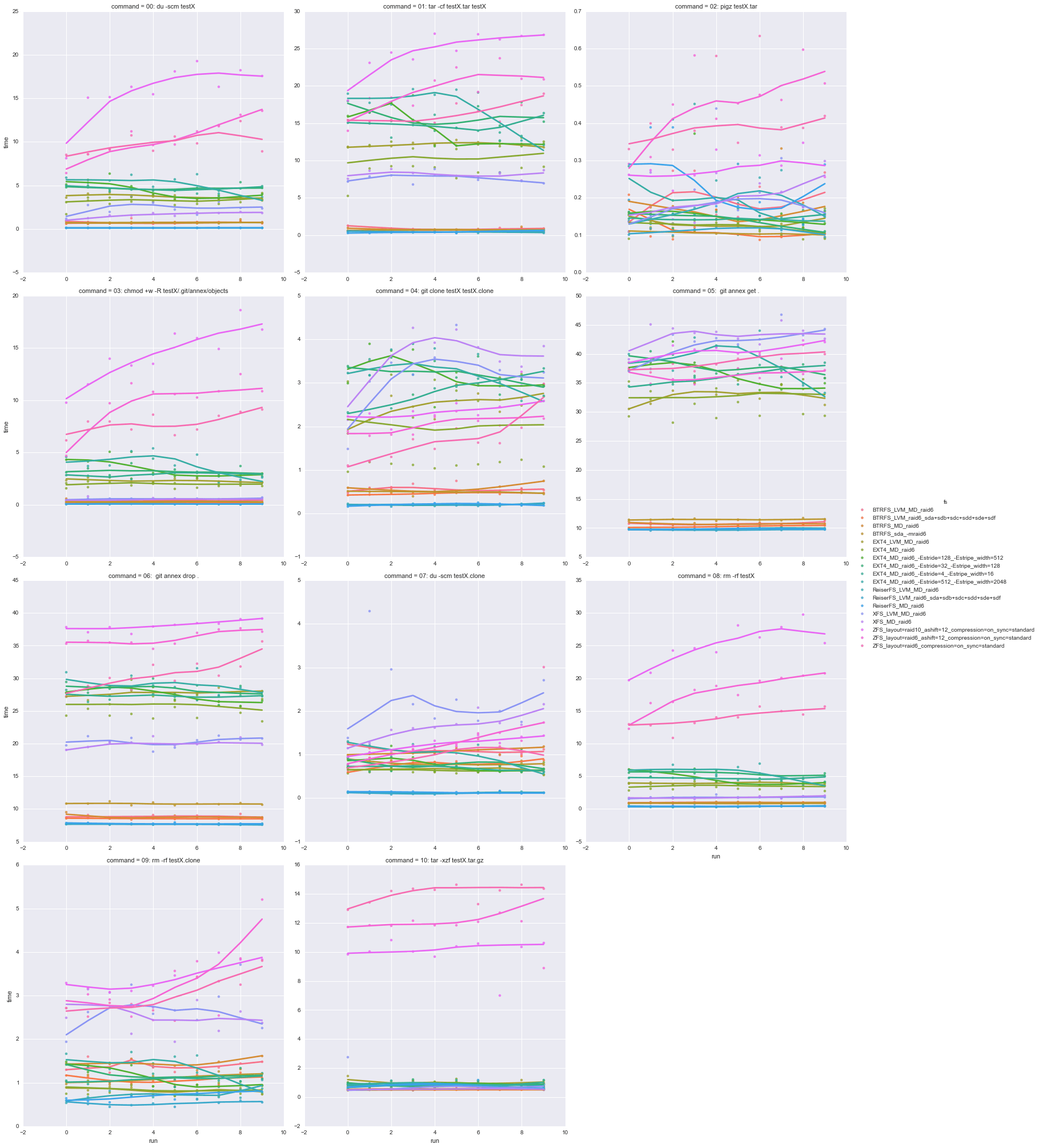 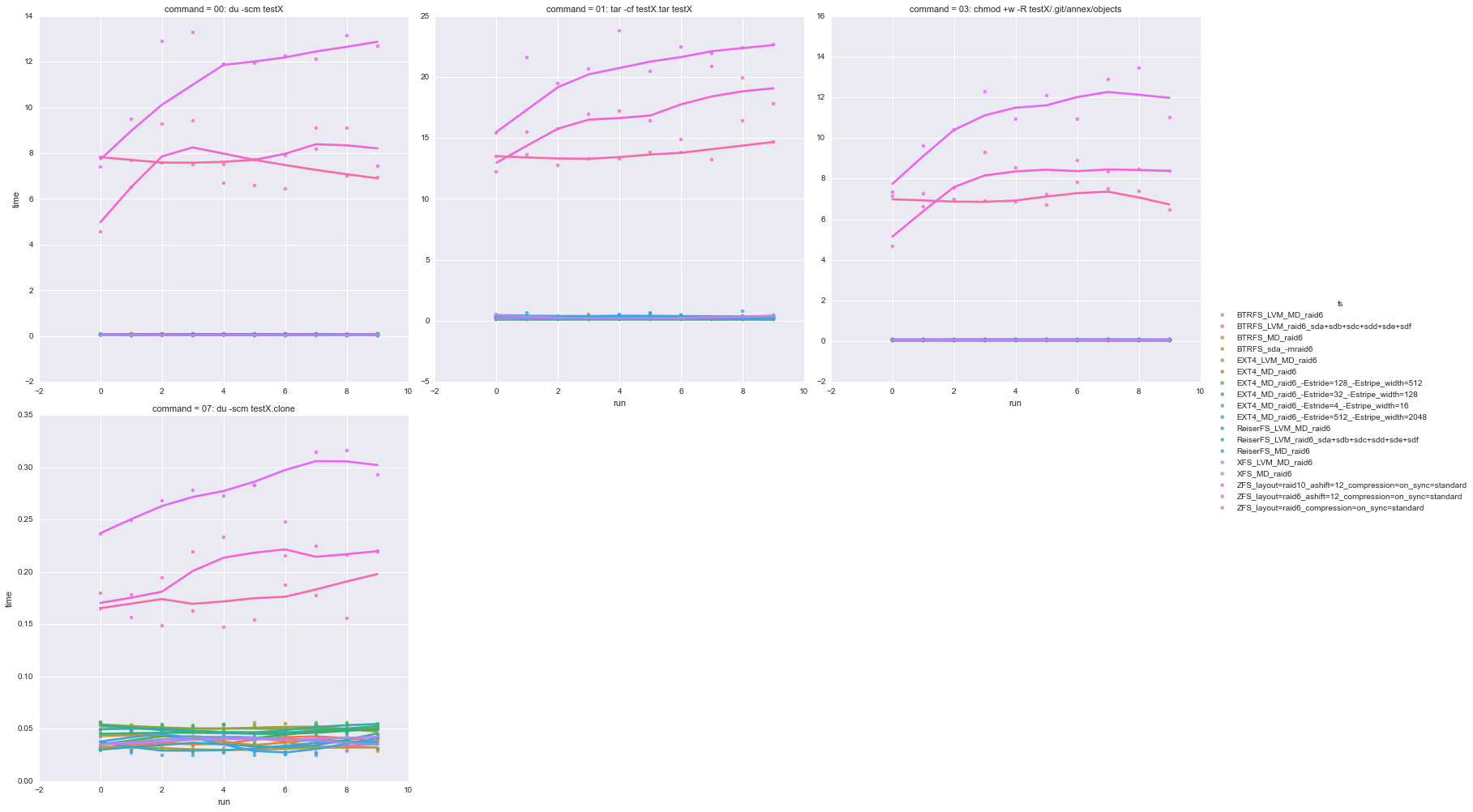 In both of the above reports (cold and warm) on small repositories we can see that ZFS performs quite poorly (and also becomes slower with higher FS utilization on many commands) but still on the same order as XFS and EXT4, while Btrfs and ReiserFS perform much smoother with ReiserFS being the most efficient. 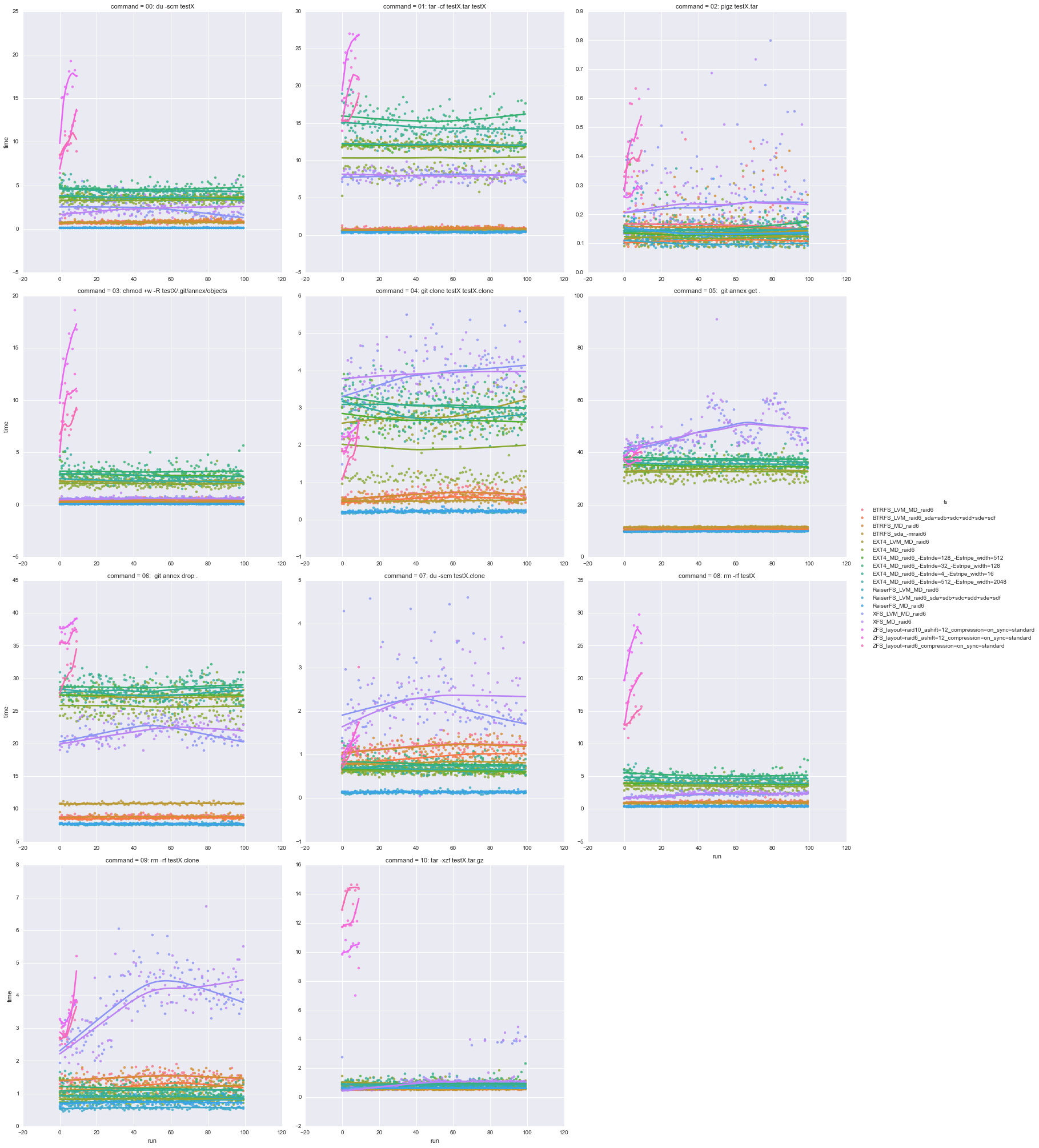 For this test we have decided to get closer to typical middle size repositories with 1000 files in each of the 100 directories (thus 100,000 original files per repository) and run 10 rounds. Unfortunately ZFS runs were taking way to long (sample single round took more than 24h) so they were interrupted.

Surprisingly ReiserFS performance detremented quite significantly, bringing Btrfs into the winners. Effect from the choice of compression (lzo vs zlib) wasn't clearly pronounced so we decided to go with lzo. 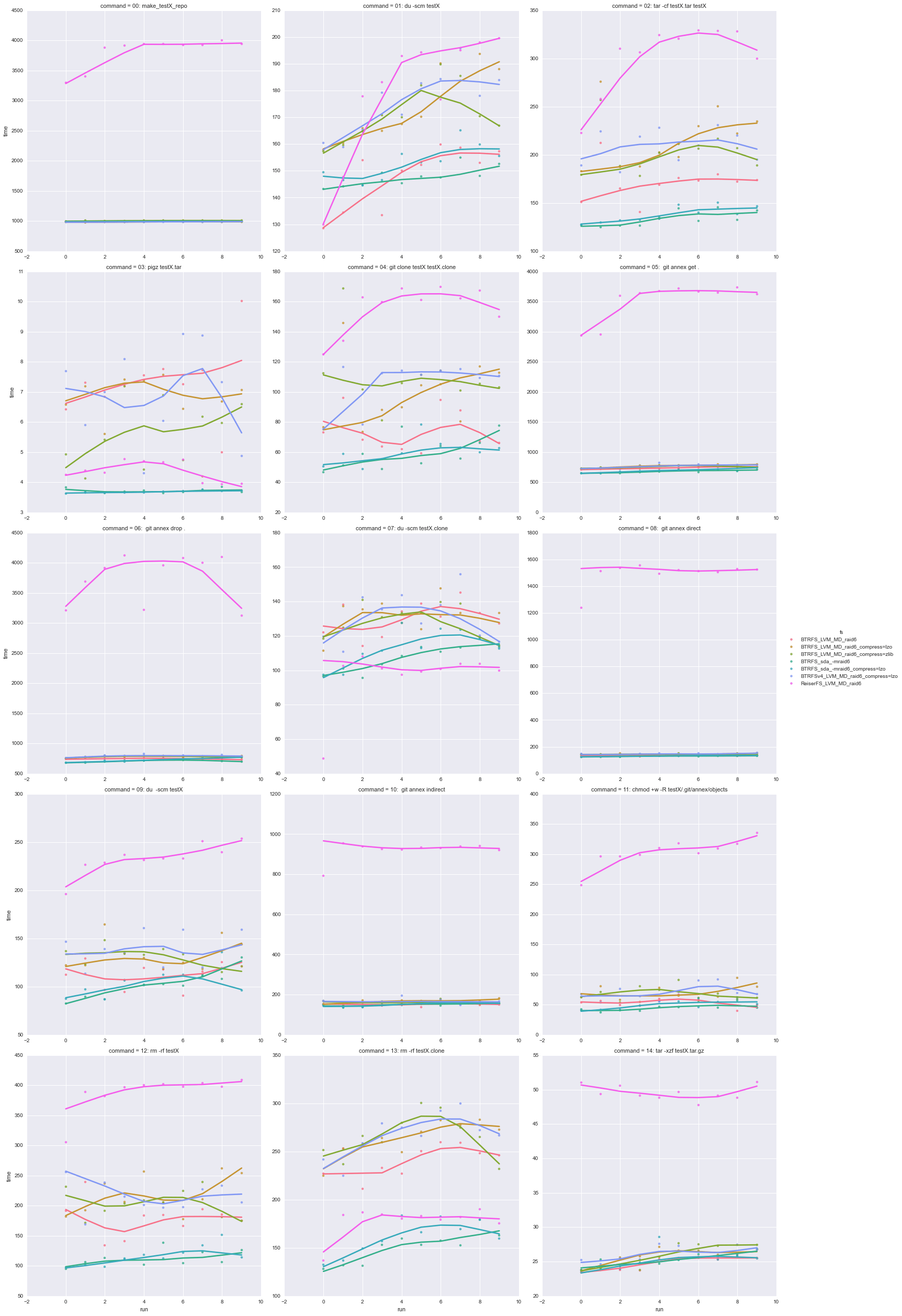 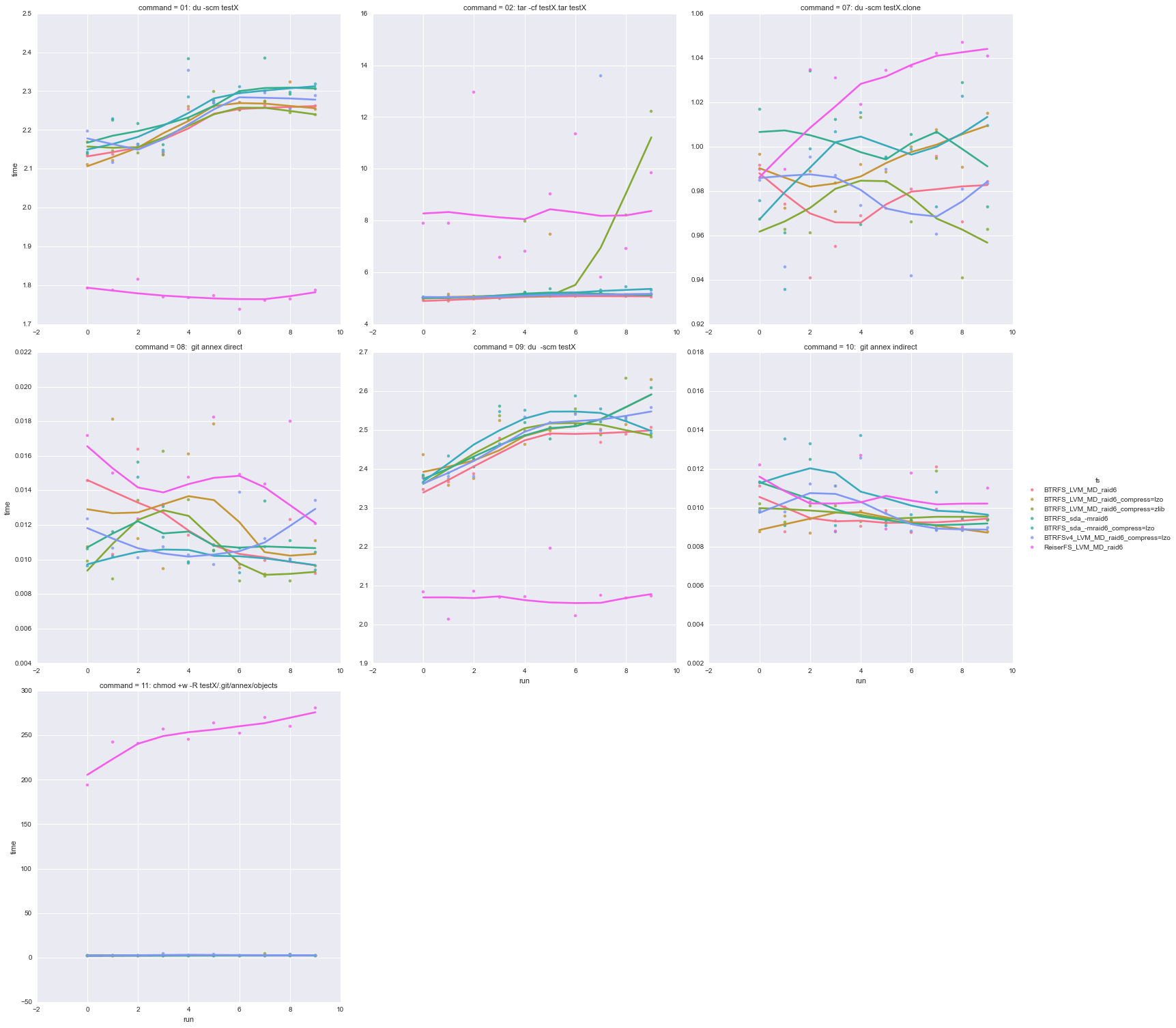